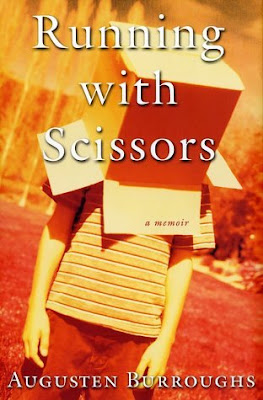 Series or Stand Alone: Stand Alone
Release Date: July 2002
Publisher: St. Martin's Press
Pages: 352
My Rating: 3.75/5
Synopsis [macmillan.com]:
RUNNING WITH SCISSORS is the true story of a boy whose mother (a poet with delusions of Anne Sexton) gave him away to be raised by her unorthodox psychiatrist who bore a striking resemblance to Santa Claus. So at the age of twelve, Burroughs found himself amidst Victorian squalor living with the doctor’s bizarre family, and befriending a pedophile who resided in the backyard shed. The story of an outlaw childhood where rules were unheard of, and the Christmas tree stayed up all year-round, where Valium was consumed like candy, and if things got dull, an electroshock therapy machine could provide entertainment. The funny, harrowing, and bestselling account of an ordinary boy’s survival under the most extraordinary circumstances…
Review:
After a brief overview of Burroughs' life as a child, the memoir talks about his adolescent years beginning at the age of twelve. When he was younger, Augusten enjoyed shiny things, such as mirrors and jewelry. He had this peculiar fascination with polishing every coin and piece of jewelry he was able to get his hands on. He absolutely loved doctors and visiting them. He imagined himself becoming one, not to heal the people of the world, but to wear the pristine white coat and being able to have his own parking spot.
He spent his days in a very clean and orderly home and spent a lot of time obsessing over his hair and clothes, making sure there was not a piece of stray lint anywhere in sight. And while Augusten imagined his future of great potential as a doctor with high standing or some famous celebrity, his parents were always fighting in the background.
Deidre, his mother, is a poet who insists that she will be famous some day. Narcissistic and seeming bipolar she identified way too much with the late Anne Sexton. His father on the other hand, a mathematics professor at the University of Massachusetts is a severe alcoholic, insisting on drinking instead of facing his wife's slow developing illness. The relationship between the two is dysfunctional and violent at times.
The two come to an agreement of divorce. Before the divorce is even mentioned, Deidre starts to see a psychiatrist after her first minor psychotic break. Dr. Finch is unlike any psychiatrist out there. How he got his PhD is still a mystery to me. The good doctor lives in Northampton, Massachusetts with his wife and seven children (biological and adopted), along with assorted patients he has allowed to stay there. Having thought that all doctors have luxurious and tasteful homes, he is highly disappointed in finding the Finch house a run-down Victorian surrounded by the very houses that he should be in.
Augusten at first stays with the Finches under the guise of needing to be protected against his father, while his mother stays elsewhere. Eventually, Dr. Finch becomes Augusten’s legal guardian at around twelve years old. Augusten’s primary residence is at the Finch’s and he stays with his mother on occasion in Amherst.
Rules are practically non-existent and children of all ages do whatever they please in the Finch household. As Augusten stays there on a more permanent basis, his transformation from who he once was and who he is started to become is astounding. Taking after some of the most unbelievable characters I've ever read about, Augusten experiences some of the most disturbingly funny and twisted things in the span of about 5 years.
I really want to leave the Finch family and assorted guests for you to discover if you haven't picked up the book or seen the movie. They remind me of a really sick version of the Brady Bunch, which sounds awful but is really entertaining. And while I didn't love the book, I had a really hard time putting it down. I'm very interested in watching the movie and seeing how well the actors that were chosen (which seem to be awesome choices in my opinion) fit the bill, sorta speak.

I'll be picking up more of Burrough's work shortly, specifically Dry, which seems to cover the next chapter in his life. The first chapter was in the back of Running With Scissors and after reading it I seriously considered running out and buying it.
Here are two small passages from the book that I'm hoping you'll enjoy:

"As time went on, my parents' relationship became worse, not better. My father grew more hostile and remote, taking a particular liking to metallic objects and serrated edges. And my mother began to go crazy.
Not crazy like in a let's paint the kitchen bright red! sort of way. But crazy as in gas oven, toothpaste sandwhich, I am God sort of way. Gone were the days when she would stand on the deck lighting lemon-scented candles without then having to eat the wax." (30)

"But she did love him. I believe it. I know exactly how that is. To love somebody who doesn't deserve it. Because they are all you have. Because any attention is better than no attention." (148)

I wanted to include the trailer for the movie because it covered a lot of good scenes I had just finished reading in the book. And if you laugh at the trailer you'll definitely want to read the book, trust me...

I have started to pick this book up to read many times, but was not sure if I would like it. Your review has me thinking that it is one I would enjoy. I liked the movie trailer too!

Great review. I read this one years ago but haven't seen the movie. I should rent it one of these days. I do have Dry on my shelf but haven't read it yet.

This one was really funny!

I loved your review even if you didnt love the book, it looks like you enjoyed it and I think I will too.
Loved your comment "They remind me of a really sick version of the Brady Bunch" - that kind of sold it for me LOL

This has been on my to be read someday maybe pile for ages--thanks for the nudge to actually read it!