Day 211 - The Vampire Diaries: The Struggle 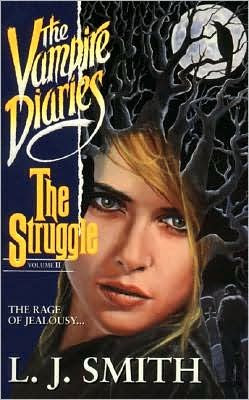 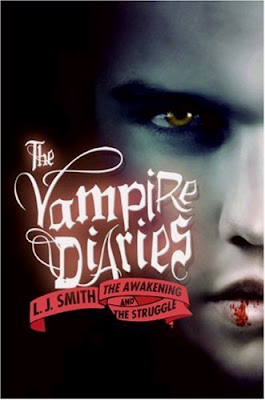 A Love Triangle of Unspeakable Horror...
Elena: Searching for the ultimate thrill, she vowed to have Stefan.
Stefan:Haunted by his tragic past, he struggled to resist her passion.
Damon:Driven by revenge, he hunted the brother who betrayed him.
The terrifying story of two vampire brothers and the beautiful girl torn between them.
Review:

The opening of The Struggle picks up right where The Awakening left off. Stefan is missing and Elena seems to know exactly who may be behind his disappearance. She goes to confront Damon and finds herself attracted to his wildness and bad boy image.

In the first book, the story of the two brothers was introduced. Born in Renaissance Italy they were both in love with same girl, Katherine, who turned out to be a vampire. She turned them both because she couldn't decide who to be with. They fought over her and she ended up killing herself in hopes that the two of them would stop hating each other. But they both blamed the other for her death and have been enemies ever since. And now history seems to want to repeat itself with Elena.
After a murder in Fells Church, Elena's diary is stolen and she fears that it points to Stefan as the murderer even though he isn't. The town definitely frowns upon her and Stefan's relationship since everyone is starting to believe that all the trouble going on started when Stefan showed up. But Elena doesn't care, she loves Stefan and I admire her courage and loyalty towards him. Her character has definitely grown from the first story and I liked her a lot more.
While Elena isn't exactly torn between the vampire brothers, the struggle she goes through is definitely a tangible thing. And her once good friend, Caroline, becomes more and more of a problem along with Tyler who was introduced in the first novel. Tyler is a straight up jerk, and ever since he was bested by Stefan, he's out to get him any way he can.

The story was exciting and filled with an eerie setting that made me want to read it as quickly as possible. The cliff-hanger ending was really good and definitely made me pick up the next book as soon I could.