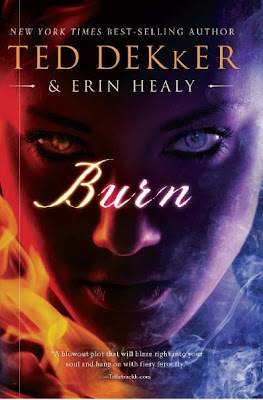 Synopsis [from goodreads.com]:
The past Janeal thought had burned away is rising from the ashes.
Years ago, the Gypsy Kumpania where Janeal Mikkado lived was attacked by outsiders. With her best friend about to be consumed by a fire, Janeal had two options: try to save her friend--at serious risk to her own life--or disappear with the million dollars that she had just discovered . . .
But the past is quickly coming back to haunt her. Both the best friend and the boyfriend that she was sure were dead have reappeared in her life, as has someone who knows about the money. There's a debt to be paid for the money she found, but there's an even greater debt she must face--and if the chaff isn't burned from her own heart, it will consume her.


Review:
First off, I absolutely love this cover!! I admit it was one of my main decisions to review it.& the book trailer was very well done in my opinion, almost like a movie trailer. The other reason was Ted Dekker... I haven't read anything by him but I own BLACK which is his first book in the Books of History Chronicles: Circle series. I've also heard some great things about him as an author so I was definitely excited to try him out. And while I enjoyed BURN I wasn't totally in love with the story.
I didn't know this was considered Christian fiction until just recently and I never noticed the fact that Thomas Nelson was a Christian publisher. I don't read a lot of Christian fiction, again not for any particular reason. I read books based on my interest in the synopsis, and this one definitely grabbed my attention. However, I didn't get a real sense of the Christian faith or religion while reading. There is some reference to God but I personally felt it was more of a spirtual thing for the characters. Anywho, I don't want the fact that BURN was put in this genre to discourage those who are wary of it. The suspense/thriller aspect of the book was very entertaining and enjoyable!
But I must say I didn't enjoy BURN as much as I was hoping for. While there was plenty of fast-paced action in the story, I found myself lacking a real connection with the main character Janeal Mikkado. And the huge twist/climax in the plot (which I can't reveal to you) kinda threw me off kilter. It's hard to discuss without giving things away. I will say the idea of this book is entirely unique, at least to me, but something I had trouble accepting.
Janeal Mikkado, along with the other characters, are first introduced when she's a teenager living with her gypsy kumpania (or community) as an outsider. She has this longing to explore the world and get far away from the people she's been around her entire life. But her boyfriend, father, and best friend don't really see things the way Janeal does. After a dark, handsome, and mysterious man comes into her life claiming the only way to save Janeal's father is to betray him... Janeal is faced with a decision that will forever alter her life. A decision that will forever haunt her no matter how hard she tries to run from it.
I didn't want to give much more of the plot away so I'll leave it at that. I'd definitely say give this one a go if your a suspense/thriller kind of reader. I don't know how this book holds up to Ted Dekker's other books however.

One person will win my gently read copy of BURN by simply commenting below with an email address... (no email address = no entry)

I'm a new follower on google/blogger. I'd have added you on twitter but the twitter picture on the side doesn't have a link that works. Anyway, count me in the giveaway, it sounds like an interesting book juliecookies(at)gmail.com

Please count me in on the giveaway. I've followed Ted Dekker for a while, though I've missed out on many of his most recent books because of college - but I did read the Circle Trilogy & loved it. : ) And his plots typically do have a rather odd twist at the end.

Um, I also had trouble with the twitter icon on the right. It took me to an error page. So I can't follow you. Sorry.

Thanks for the giveaway!
ambience.of.rain [at] gmail.com

This sounds like a great book and I liked your review. Your blog is neat..

I tried to go to twitter but came up with page error. ?? Sorry

I fixed the twitter link guys. Sorry about that. Please comment after you try the link again so I can give you the extra entries =)

No need to enter me, doll. I'm dropping in to say thanks for the e-mail. I've got this posted at Win a Book for you.

Despite the fact that I'm an atheist, I am a huge fan of Ted Dekker's work -he never shoves the Christianity in the reader's face, and his writing is very well crafted. I would love a chance to read "Burn."
baileythebookworm at gmail dot com

bacchus76 at myself dot com

I would love to win!

Would love to read this!

We posted about this giveaway at Winning Readings: http://winningreadings.blogspot.com/2010/03/burn.html

Greetings,
Really LOVE books by Ted Dekker. I've read almost all of them. Not this one. Please enter me in the give away.
I'm a follower.
Blessings,
Trinity Rose

I've read and enjoyed 2 books by Dekker in the past. Please enter me.

I really want to read this one! Please enter me.

Daunting cover! I'd love to read the book.

I would love to read this!
I subscribe to your blog and I follow your blog.
mittens0831 at aol dot com

I've never read anything by Ted Dekker but would like to judging from your review. It's said one shouldn't judge a book by its cover but I think it's cool.

Not sure if I should do extra entries separately but will do just in case the draw is randomly generated. My apologies if they could have all been accounted for in the same post.