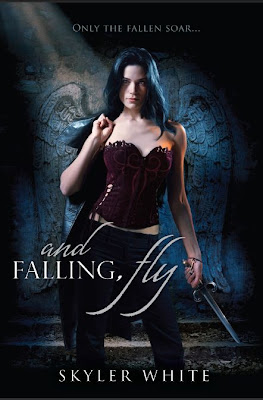 In a dark and seedy underground of burned-out rock stars and angels- turned-vampires, a revolutionary neuroscientist and a fallen angel must pit medicine against mythology in an attempt to erase their tortured pasts...but at what cost?

Olivia, vampire and fallen angel of desire, is hopeless...and damned. Since the fall from Eden, she has hungered for love, but fed only on desire. Dominic O'Shaughnessy is a neuroscientist plagued by impossible visions. When his research and her despair collide at L'Otel Mathillide- a subterranean hell of beauty, demons, and dreams-rationalist and angel unite in a clash of desire and damnation that threatens to destroy them both.

**First off, I have to thank Skyler for contacting me and sending me a copy of AND FALLING, FLY. A BIG congratulations goes out to her as well since today is release day for this dark, unique, and wonderfully written story. Please stay tuned for an interview with Skyler White coming up very soon in the future.**

Olivia is a vampire and fallen angel of desire and she is one of the "Damned". She has done nothing but long for love despite being desired by almost every man she comes into contact with. But Olivia can't desire on her own, she can hardly feel anything on her own. She feeds when she finds someone who either desires or fears her which doesn't seem to be a problem be it man or woman. But Olivia is tired of the life she's living for countless years. She believes that if she can find true love she will be able to regain her wings and return to Heaven. But no one can accept all of her...and Olivia is slowly starting to accept the fact that she may just have to be alone for the rest of her life.

Dominic is a neuroscientist plagued by memories of past lives and past loves. His job is his life and he's obsessed to find a way to cure his "illness" and rid himself of his delusions and "seizures". To other immortals Dominic is a "Reborn", someone who is reincarnated again and again and given the memories of all of their past lives around the time of puberty. Dominic refuses to believe these are actual memories however. There has to be a way he can scientifically fix his delusional visions.

Their two lives end up intertwining together at L'Otel Mathillide - an underground hotel more commonly referred to as Hell by the cursed, damned, and reborn. The mysterious innkeeper, Gaehod, is a superb catalyst in the story that left me wanting more and more. He seems to know so much its almost magical yet I found myself frustrated at times because I desperately wanted to know all of his secrets.

Coming in from two different perspectives (Olivia's first-person POV and Dominic's third-person POV) gives the reader a wide view of science vs. mythology. Skyler White not only entertains with almost lyrical descriptions and storytelling, but she makes one question their own beliefs and feelings. Love, fear, religion, science, faith, desire, sacrifice... the list could go on and on of the topics that are taken on in AND FALLING, FLY.

I fully admit it took me a little while to get into the book, but before I knew it I was sucked in. Skyler White's debut is a unique addition to the paranormal genre that will get you to think and question your own life. I'm definitely looking forward to what Skyler has in store for the world next.