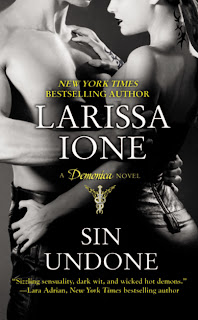 HER TOUCH IS DEADLY
As the only female Seminus demon ever born, master assassin Sinead Donnelly is used to being treated like an outcast. She spent decades enslaved, and now vows she’ll die before she’ll relinquish her freedom again. Then Sin’s innate ability to kill her enemies goes awry: She creates a lethal new werewolf virus that sparks a firestorm of panic and violence.

HIS HUNGER CAN’T BE DENIED
Half-werewolf, half-vampire Conall Dearghul is charged with bringing in Sin to face punishment for the plague. And she’s no stranger: He’s bound to her by blood, and the one sexual encounter they shared has left him hungering for her raw sensuality. Worse, Sin is the underworld’s most wanted and Con soon learns he’s the only one who can help her . . . and that saving her life might mean sacrificing his own. 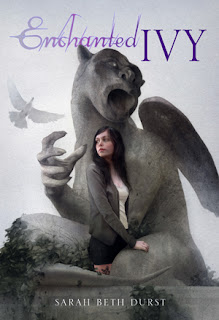 
What Lily Carter wants most in the world is to attend Princeton University just like her grandfather. When she finally visits the campus, Grandpa surprises her: She has been selected to take the top-secret Legacy Test. Passing means automatic acceptance to Princeton. Sweet!Lily's test is to find the Ivy Key. But what is she looking for? Where does she start? As she searches, Lily is joined by Tye, a cute college boy with orange and black hair who says he's her guard. That's weird. But things get seriously strange when a gargoyle talks to her. He tells her that there are two Princetons—the ordinary one and a magical one—and the Key opens the gate between them. But there are more secrets that surround Lily. Worse secrets.When Lily enters the magical Princeton, she uncovers old betrayals and new dangers, and a chance at her dream becomes a fight for her life. Soon Lily is caught in a power struggle between two worlds, with her family at its center. In a place where Knights slay monsters, boys are were-tigers, and dragons might be out for blood, Lily will need all of her ingenuity and courage—and a little magic—to unite the worlds and unlock the secrets of her past and her future. 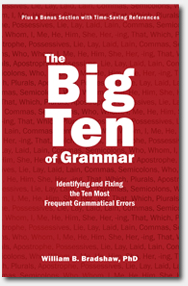 The Big Ten of Grammar :: William B. Bradshaw
(July 2010 - Synergy Books)
Have you ever hesitated when choosing between I or me? Have you had trouble figuring out tricky pronouns like who or whom? What about those always-troublesome commas-do they go before or after the quotation marks? If you're anything like the rest of us, you struggle with these age-old grammatical issues. In this practical and easy-to-understand handbook, Dr. William B. Bradshaw identifies the ten most common errors in English grammar and helps you to recognize and correct these mistakes, enabling you to write and speak with greater clarity in your personal and professional life. The Big Ten of Grammar is the perfect guide for students, teachers, and professionals to use in brushing up on their grammar.

I've been wanting to read ENCHANTED IVY for a while. Looking forward to your review!