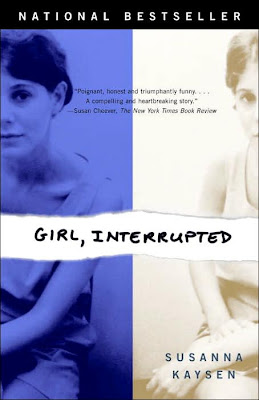 Girl, Interrupted
Susanna Kaysen
Series or Stand Alone: Stand Alone
Synopsis: [from book cover]
In 1967, after a session with a psychiatrist she'd never seen before, eighteen-year-old Susanna Kaysen was put in a taxi and sent to Mclean Hospital. She spent most of the next two years on the ward for teenage girls in a psychiatric hospital as renowned for its famous clientele - Sylvia Plath, Robert Lowell, James Taylor, and Ray Charles - as for its progressive methods of treating those who could afford its sanctuary.
Kaysen's memoir encompasses horror and razor-edged perception while providing vivid portraits of her fellow patients and their keepers. It is a brilliant evocation of a "parallel universe" set within the kaleidoscopically shifting landscapse of the late sixties. Girl, Interrupted is a clear-sighted, unflinching document that gives lasting and specific dimension to our definitions of sane and insane, mental illness and recovery.
Review:

I'm kind of struggling to write a review for this book. Although I liked and enjoyed reading it, I felt it was just an okay read. The memoir tells the story of Susanna Kaysen's stay at McLean Hospital in Massachusetts. The short chapters were easily read and they retold certain experiences that Susanna went through and the people she came across while at the hospital. Even though they weren't necessarily in any chronological order they were still easy to follow.

In the late 1960s, at the age of eighteen Susanna voluntarily checks herself into McLean intending to stay only for a few weeks. But after a twenty minute interview the doctor Susanna was seeing advocates a committal that ends up being close to two years. She introduces a lot of the patients and even some of the staff of the hospital. Also inlcuded within the pages are some of Susanna's personal medical files. Those files were only given to her after she was forced to hire a lawyer in order to see her records.

I did enjoy the book but it just didn't leave a lasting impression with me. I do recommend it however, because it really was a unique experience into the human pysche and how fine a line between insanity and sanity there is in a lot of us. I do have to admit I enjoyed the movie better.

I liked this book a lot. Maybe because it is something that has always freaked me out-- the idea that other people could label someone "insane' or "unbalanced" and then its totally out of the individual's hands.
The movie rocked too.

I really enjoyed this book when I read it. I think the movie was maybe a little more understandable and it did seem like I was "seeing" the movie when I was reading the book. That's one reason why I prefer to read a book before I see the movie.

I did like the book, but I definitely think I ruined it by watching the movie first lol. I just felt I had a better sense of the characters in the movie.

You know, I never did read this OR see the movie. Perhaps I'll check out the movie sometime. Great review!

BTW, I have a little something for you at my blog, you can pick it up here.

I have never read the book or seen the movie :o, but I love books on mental illnesses (memoirs especially). I have to read the book, i will not watch the movie because I do not like either Jolie or Swank, another :o

Lol Lilly. I can totally understand that. I think the book would have been a lot better for me if I hadn't watched the movie first. So I think you'll like it.

Very thoughtful review Mishel! You know me and 'disturbing reads' so I will probably never get to read it, but I did see the movie. :)

I loved this book when I read it a few years ago. Thanks for the great review!