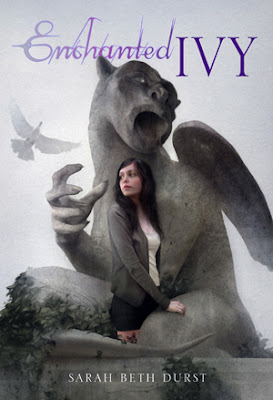 What Lily Carter wants most in the world is to attend Princeton University just like her grandfather. When she finally visits the campus, Grandpa surprises her: She has been selected to take the top-secret Legacy Test. Passing means automatic acceptance to Princeton. Sweet!Lily's test is to find the Ivy Key. But what is she looking for? Where does she start? As she searches, Lily is joined by Tye, a cute college boy with orange and black hair who says he's her guard. That's weird. But things get seriously strange when a gargoyle talks to her. He tells her that there are two Princetons—the ordinary one and a magical one—and the Key opens the gate between them. But there are more secrets that surround Lily. Worse secrets.When Lily enters the magical Princeton, she uncovers old betrayals and new dangers, and a chance at her dream becomes a fight for her life. Soon Lily is caught in a power struggle between two worlds, with her family at its center. In a place where Knights slay monsters, boys are were-tigers, and dragons might be out for blood, Lily will need all of her ingenuity and courage—and a little magic—to unite the worlds and unlock the secrets of her past and her future.

I gotta say I've never wanted to go to Princeton as bad as I do now that I've read Enchanted Ivy. I've never been an uber smart gal and I've never wanted to get into a high-rated university when I set out for college. But if higher education was anything like it is in Lily's world I'd so find a way to attend Princeton! Why you ask? Because there is magic at Princeton!! And an unprepared Lily Carter discovers all the secrets of the university and about herself as well.

Lily has wanted to attend Princeton for as long as she can remember. She wants to go to the same university her Grandpa did and make him proud of her. As a surprise to Lily her Grandpa has set up an "admission test" of sorts with his elite group of college friends. If she passes she gets automatic approval into the university! But this is no ordinary college admission test! Much more like a treasure hunt, Lily must hunt the campus for clues to find the Ivy Key. She isn't allowed to have any assistance and yet there's a strange tiger-haired boy hanging around helping Lily out. Nevermind that he is a hot college student, Lily has a test to pass! Soon Lily discovers things that will change life as she knows it forever...

I was surprised at how many twists and turns the plot took and how well Lily's character took each obstacle in stride. She was entirely lovable and quick-thinking. She accepted help when needed and yet still had a respectable independence about her. I found the fact that she had a hard time wrapping her mind around a world filled with magic a little annoying but it's totally realistic. Although I love paranormal, fantastic, and magical things I think I'd even have trouble accepting an alternate world where magical creatures lived and magic itself seemed a living, breathing entity.

Enchanted Ivy, although filled with fantastic creatures and a well-known university wrapped in magical secrets, will easily resonate with those getting ready for college. It's an extremely exciting and scary time for teenagers and reading a novel like this will allow the reader to lose themselves within a well-written story. Might just be the best stress-reliever out there! But I think Enchanted Ivy will easily earn a place on many bookshelves, not just teenagers and young adult readers.

This is my first time reading a novel by Sarah Beth Durst and I gotta admit I loved it. The writing style was simplistic in form but still did a remarkable job bringing the magic of Princeton to life. I definitely think the writing, the wonderful characters, and fantastic plot make this book a quick and hard-to-put down read. Although the ending is satisfying I'm crossing my fingers for some sort of sequel because I would love to continue on in the magic-filled world Sarah has created.

Great review! You somehow made ENCHANTED IVY sound even more amazing than it already did from all the other positive reviews I've seen. :)

Sounds like a good all-rounder! I just realised...does anyone find it a bit odd that the girl's legs go into the statue? Maybe it relates to some part of the novel, I don't know.

It's great to hear such a positive review. I'll definitely have to pick this one up sometime soon.

This sounds so good! I really want to read this one!

Great review and I have already added to my wish list.
Thanks for letting me see through your eyes/words your feelings.

This book sounds soo good! Thanks for the great review :)

Fantastic review! I can't wait to read this one. I've had Ice for a while and should really read it soon.

I have her book Ice but have never read it. Gotta bump it up on the to read list and add this one too.

Who doesn't love gargoyles?!
lol And I'm with you, so many of these YA paranormals make me want to relive my high school years or get back into college just to see what I might have been *missing* ;D

The gargoyle on the cover is awesome and the book sounds like it going to be a great read.
Stephmartin71(at)yahoo(dot)com

Great review. Thanks for sharing your thoughts.

What a great review. I've now added this to my TBR list :)

I love a few twists and turns here and there, I've also read an excerpt and this review makes me want to see this book for myself. Thanks.

I have a feeling this book will surprise me, thanks for the review.

I also heard great things about the book Ice...I wonder if it's just as catchy as Enchanted Ivy seems to be. I'll probably read both. Nice Review.

seems like this book has got it all. Great review.

I'm dieing to read this as it is. great review.

I wonder how Ice is?