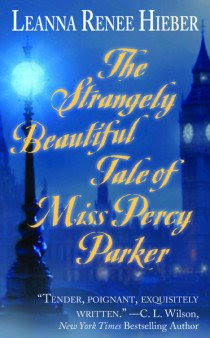 What fortune awaited sweet, timid Percy Parker at Athens Academy? Hidden in the dark heart of Victorian London, the Romanesque school was dreadfully imposing, a veritable fortress, and little could Percy guess what lay inside. She had never met its powerful and mysterious Professor Alexi Rychman, knew nothing of the growing shadows, of the Ripper and other supernatural terrors against which his coterie stood guard. She saw simply that she was different, haunted, with her snow white hair, pearlescent skin and uncanny gift. This arched stone doorway was a portal to a new life, to an education far from what could be had at a convent—and it was an invitation to an intimate yet dangerous dance at the threshold of life and death...

First off I have to thank Lenore, from Presenting Lenore, for sending Leanna my way. I received an email from Leanna asking me if I was interested in reading her book. It was in that email that she let me know Lenore had mentioned that I might like to read and review The Strangely Beautiful Tale of Miss Percy Parker. I'm so very glad that I got the chance. So I just wanted to take the time out to thank both Lenore and Leanna =)

Leanna has created a rich and unique world filled with interesting and new characters going through things I haven't quite seen before. As the story opens we meet six children that have all been chosen to fulfill a destiny that none of them ever asked for. They are specifically chosen to be a part of The Guard - a team gifted with special powers. Their job is to police the unruly spirits that are constantly around the streets of London. However, they are told to be on the lookout for a seventh member that they will eventually need desperately.

Almost twenty years later, the six children are all grown with "day jobs" of their own. Rebecca is now headmistress of Athens Academy. A massive school that is beautiful and grand. Athens takes inspiration from Greek mythology and prides itself on running smoothly with set rules in place. The leader of the Guard, Alexi, is a professor of Alchemy and Mathematics at Athens. He is somewhat cold and distant but not unapproachable. He has been on the lookout for the Prophecy of the Guard's seventh member since he was a child. Waiting so long has seemed to freeze his heart and has trained him to be professional and aloof from personal things. The Guard fully trusts Alexi with their lives and the continuation of the team.

Michael, Josephine, Elijah, and Jane make up the rest of the Guard. Leanna does a great job integrating these characters into the story but there is still so much to be spoken of them. I hope to discover more about them and their lives as the series progresses.

And now, on to the main character: Miss Percy Parker. She is seriously a breath of fresh air. To put it simply, Percy is an albino...but the way she is described is truly unique. It took me a while to figure out that she was in fact albino because to me she just sounded ethereal, with her pale skin, light eyes, and snow white hair. However, the rest of the world looks at Percy very cautiously. Most think her a ghost and avoid her. She has definitely lived a very lonely and sheltered life at a strictly religious convent.

But she has recently transferred to Athens Academy with her uncanny gift with languages. She also has another gift - a secret really, that she has fiercely guarded ever since someone at the convent found out. She can see and communicate with ghosts. She doesn't know just how special her communication gift is. Because the Guard can of course see ghosts, how else would they be able to protect the people of London without seeing their foe? However, not one of them can hear or communicate any ghost. So Percy is unique all around.

Her personality is timid at best. Despite her gift with languages and communication she struggles with mathematics. Professor Alexi has signed on to tutor her in hopes she can somehow grasp the subject. But how in the world can Percy concentrate on anything when she is literally swooning in Alexi's presence? She's never really had living friends, let alone a boyfriend. These new feelings are strange and deliciously different, but as London is plagued by brutal murders by the Ripper, her feelings seem unimportant.

I'm leaving a lot out, sorry about that. But there is just so much going on in this story. You really must discover the details on your own. There's plenty of action, suspense, thrills & chills, and romance weaved into Leanna's writing. I think everyone can find something they'll like in Percy's story. And don't be discouraged by the mouthful of a title, it grew on me quickly as I found myself agreeing with Leanna's choice of words...this tale is indeed strangely beautiful. I'm so excited to see what Leanna has in store for us in the next book. The series has so much potential to be something amazing that it's bursting from the seams!


P.S. - I hope to have a few more posts featuring Leanna and The Strangely Beautiful Tale of Miss Percy Parker coming up soon, so be on the lookout!! This book sounds so good Mishel. I remember seeing it at Lenores. I really like the cover too-very nice!

I was pretty sure I was going to like it when I first read the synopsis but I was surprised at just how much I ended up enjoying it.

Your review is fabulous and now I can't wait to read this. It sounds very mysterious and suspenseful.

Thanks so much, Mishel! You've made my day! I've linked to you on my sites and forwarded the review to Dorchester, I really appreciate your help in launching my book, it's my dream come true, blessings!

No, thank you Leanna!! I'll be emailing you soon so be on the lookout <3

I'm reading this now! Glad to see you enjoyed this books so much. :)

Sounds AMAZING! I love the book trailer. Really up my alley.. romance, paranormal elements, and suspense. I may have to buy this one if I don't procure a copy another way.

Oh yay! Leanna was so nice in her pitch to me that I gave her a shortlist of bloggers I read that I thought would really like the book. I'm glad I wasn't wrong :)

Wow. It sounds like there is a lot going on in a very rich story and has some very interesting characters.

Great review. You really make it sound like a great book.

Like your review! Been reading good reviews about this book, thanks!