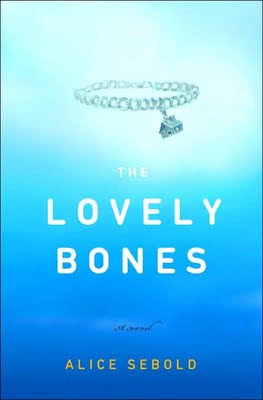 Synopsis [from amazon.com]:
When we first meet 14-year-old Susie Salmon, she is already in heaven. This was before milk carton photos and public service announcements, she tells us; back in 1973, when Susie mysteriously disappeared, people still believed these things didn't happen. In the sweet, untroubled voice of a precocious teenage girl, Susie relates the awful events of her death and her own adjustment to the strange new place she finds herself. It looks a lot like her school playground, with the good kind of swing sets.
With love, longing, and a growing understanding, Susie watches her family as they cope with their grief, her father embarks on a search for the killer, her sister undertakes a feat of amazing daring, her little brother builds a fort in her honor and begin the difficult process of healing. In the hands of a brilliant novelist, this story of seemingly unbearable tragedy is transformed into a suspenseful and touching story about family, memory, love, heaven, and living.


I had heard that THE LOVELY BONES was different; powerfully written and a favorite of many. I picked it up before I knew there was a movie being released. But after finding that out I quickly put it at the top of my TBR list.

I'm kind of at a loss for words about the book. I liked it, a lot as a matter of fact. I think you should read it if you haven't already and maybe even re-read it if you have. It's that good. I'm one all for different and unique story-telling. Immediately the reader knows that the narrator, Susie, is dead. They can find that out without even opening the book...But in no way does that take any suspense or meaning out of the story.

The victim of a rape and murder, Susie Salmon (Salmon just like the fish) ascends to heaven. The way heaven is portrayed in the novel is not entirely new but was very interesting to read about. Susie's personalized heaven looks a lot like her old neighborhood. The people she comes across are in their own version of heaven that just happens to overlap hers. She finds out that she can have anything she wants in heaven - except she can't ever grow up.

From heaven, Susie is able to watch over her friends and family. Her grief-stricken father struggles to love his remaining two children while still holding on to his little Susie. Her sister, Lindsey, is determined not to be defined as the dead girl's sister. She refuses to let the loss of Susie overwhelm her. Her younger brother Buckley, doesn't understand the meaning of death just yet. And her mother realizes that she may not have really wanted to be a mother.

Two of Susie's classmates feel the loss just as strongly. Ray Singh and Ruth Connors who are developed so well throughout the story. It's with Susie's eyes that the reader is able to watch everyone try to move on in life. The terrible struggles one must go through after the loss of someone dear, the frustration of not being able to make things better, and the heartbreak of watching relationships fall apart are all confronted head on by Sebold. But in the end I found that the message of love - be it familial, romantic, or friendship - can both hurt and heal lives.

My advice to you: Read It! If the characters don't grab you, I think the writing will.

I'm looking forward to the movie. I think there is a lot of promise with the chosen cast. I'll definitely be picking up Alice Sebold's memior LUCKY, and her other book THE ALMOST MOON.

I read this a while ago now, so don't really remember the details. Maybe I will re-read it before the movie comes out... Thanks for the review :)

I'm glad to hear you liked it. I have yet to read it but I read Sebold's memoir Lucky about her being raped in college and fell in love with her writing. I will be reading this one next.

Oh I loved this book when I first read it. The writing was beautiful and the story was so sadly touching. I didn't know it was being made into a movie! I think I might re-read it now, if I can find my copy of it. :p

It's been a long time since I read this book. But, I loved it. I read The Almost Moon... it's kinda freaky deaky... but, I really am glad I read it. I can't wait to hear what you think of it.

(Diane) Bibliophile By the Sea said...

I LOVED The Lovely Bones; can't wait to see the movie!