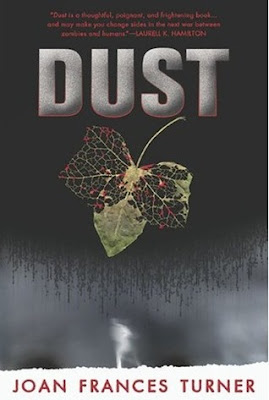 Source: Won from giveaway from All Things Urban Fantasy

Nine years ago, Jessie had a family. Now, she has a gang.

Nine years ago, Jessie was a vegetarian. Now, she eats very fresh meat.

After she was buried, Jessie awoke and tore through the earth to arise, reborn, as a zombie. Jessie’s gang is the Fly-by-Nights. She loves the ancient, skeletal Florian and his memories of time gone by. She’s in love with Joe, a maggot-infested corpse. They fight, hunt, dance together as one—something humans can never understand. There are dark places humans have learned to avoid, lest they run into the zombie gangs.

But now, Jessie and the Fly-by-Nights have seen new creatures in the woods—things not human and not zombie. A strange new illness has flamed up out of nowhere, causing the undeads to become more alive and the living to exist on the brink of death. As bits and pieces of the truth fall around Jessie, like the flesh off her bones, she’ll have to choose between looking away or staring down the madness—and hanging onto everything she has come to know as life

If I had to describe Dust in one word it would have to be unique. Unique can be both a good and bad description. You can call someone’s outfit “unique” when really you want to say “What the hell were you thinking when you got dressed this morning?” or you can describe an innovative and/or creative idea as “unique” when someone suggests something you’ve never heard of before (i.e. “Sounds crazy but just might work” sort of thing). In Dust’s case, I would say that it’s a good description. It was certainly a different kind of reading experience for me, but one I’m not sorry I had. If you haven’t guessed by the description above, or by reading other reviews about the book, Dust is about zombies. And while I’m no zombie guru, I know the concept and premise of Dust isn’t like other zombie books out there. Once you get past the Gritty, Gruesome, and Gory (yes! the three G’s) outer layer you come across a book that is filled with so much more than just the flesh-eating undead moseying about a post-apocalyptic world. I found an emotional depth that was sucking me into the story and some of the most captivating descriptive passages that I’ve read in a long time.

Jessie is the main character, a zombie girl who has been dead for over nine years and who is currently losing body parts. She’s a part of The Fly-by-Nights, one of the many undead gangs currently hanging about. Her gang revolves around fighting hard when the mood strikes, hunting as a solid group, and dancing together when the time is just right. Although the gang can be pretty rough with each other, breaking bones and scraping away skin, they only eat and hunt animals. They leave the hoo-eating to the other gangs in the city. Although, one or two of the members of The Fly-by-Nights have tasted hoo-flesh before, Jessie’s bug-infested love interest, Joe being one of them.

But something has invaded the woods Jessie and her friends live in. They’ve invaded the beaches, the cities, maybe even everywhere. These creatures introduce Jessie to a strange illness that has abruptly surfaced. The illness seems to give the already powerful undead an insane amount of additional strength. But it also seems to reverse the decaying process and causes the undead to become more alive. On the other hand, the illness is causing a lot of the hoos to basically turn into the undead without actually dying yet. Jessie could care less what happens to the hoos, despite the fact that she used to be one of them. Despite the fact that whatever is happening to them is sickening and wrong on so many levels, she could easily turn her back on them all. But when it starts affecting her gang and most of the undead around her, Jessie’s curiosity wins out and the investigation begins…

I have to admit, before we go any further, that the constant reference to humans as hoos made me think of The Grinch Who Stole Christmas. It got a little annoying to say the least. But as I relaxed, stopped thinking about those weird up-turned noses that always creeped me out, I got over it. Another thing that kind of threw me off, especially in the beginning of the novel, was the concept of the undead brain. In Dust, the author describes zombie brain waves as musical notes, with each zombie having a distinct and unique sound/instrument. It sounds cool but I never really “got it”. I guess I needed more of an explanation. *shrugs*

Small things aside, the book worked for me. Yes, it’s definitely one of the most grossly depicted novels I’ve read in a while. The gory details start right at the beginning and don’t let up. I can see a lot of readers having to put the book down or stop reading completely. Me? I guess I can just handle it, which I know a lot of you out there can as well. Just don’t eat while reading; I did get a little queasy while eating lunch when I first started the novel.

I actually admire Turner for being so blunt and not sugar-coating her writing. It shows her honesty and her courage and I appreciated her (and her editor!) being so forth-coming in her work. Another thing I just have to mention about Turner’s writing is her way with describing events, places, emotions, and well…pretty much anything. I found myself re-reading a number of different parts in the story because of the cleverly written passages. I picked a few to share with you all in hopes it would pique someone’s interest in the book:

“He trembled in his sleep. He got tremors a lot now, he said it was just old age, but from where I sat he looked like a twist of dried-out paper folded into human shape, hiding and shaking with fright at the prospect of sharp scissors, a lit match, a good gust of wind.” (104)*

“There was something else in the air around us, something urgent and expectant making a slow burn of my skin and nerves; it wasn’t anger or sorrow or anything like, it was the tremors that echo through the arm after a hard blow of the fist, the taste of still-warm flesh forever fading from the mouth.” (217)*

“The pearl gray sky and dark blue water met at a horizon line so straight and sharp it looked drawn with a ruler; the waves rushed in, the tide rushed out, with the endless repetition of a heartbeat, the gulls circling in constant call and response.” (339)*


These small excerpts really don’t do the book justice but I still wanted to include them. I definitely think the writing is what sold me.

Jessie is an engaging character but not a very likable one. I did find myself empathizing with her on some occasions but overall I feel she’s just been dead too long. Her outlook on the world is skewed which I suppose I can understand. But I’m more of an emotional hoo myself. The supporting characters are a different story… I found myself attached to the more emotional ones, but the reason is probably obvious. But as I said before, it’s hard not to want to keep reading about what Jessie is thinking or what she is doing. I just can’t say I like the girl personally. I enjoyed how Turner described the undead though, in all their different stages of decay. It was gross but it was enlightening and helped define who the characters were.

Dust is certainly not for the faint-hearted but I really enjoyed it. I enjoyed the emotional twists in the plot that extended the zombie novel into one that grabs you by the guts, literally. It causes one to question what they would do in a situation similar to Jessie’s, zombie-filled world aside. I definitely recommend the book and hope you’ll at least give it a chance. It's brave, real, and entirely from the undead perspective. It's an experience you simply have to try for yourself. I look forward to Turner's next project - a planned sequel titled Frail - a novel from the human perspective.

The cover is really quite clever. It ties in with the story and picks up on the stages of decay I was talking about before, which really helped with the character development. However, it’s not as eye-catching as it could be.

*Excerpts from the Uncorrected Proof

Carrie at In the Hammock Blog said...

uh oh, i think i might be one of the 'faint hearted' lol!! thanks for the awesome review!

I can see that you enjoyed this one, great review :)

Carrie - lol It's a little gory but really well-written =)

Blodeuedd - If you ever do read it I'd be really interested to see what you think!

I think Unique is a good word to describe this - I saw the synopsis and just thought to myself "Well that's different ..." and I kind of want to read it. After reading your review, I think I will have to go out and grab it. Thanks! :)

This book looks really complicated but in a good way. Can't wait to read it

Oh...my comment didn't save. Well, I haven't read this book yet, but I would really like to! It sounds fantastic and I love your review:)

I think this sounds absolutely fantastic. I just love zombies. Excellent review. I really want to read this now.

When I saw the title I thought of Pullman's books, The Golden Compass series. Thanks for the review. I like that you like the writing.