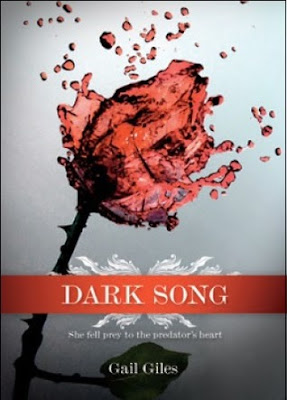 Source: Won from giveaway from All Things Urban Fantasy

Marc said he heard the dark song when he creeped houses. The song the predator's heart sings when it hears the heart of the prey. I heard it now. Marc said it had always been in me. Lurking. Waiting for me to hear.

Ames is not the person she was a few months ago. Her father lost his job, and her family is crumbling apart. Now, all she has is Marc. Marc, who loves her more than anything. Marc, who owns a gun collection. And he'll stop at nothing--even using his guns--to get what he wants. Ames feels her parents have betrayed her with their lies and self-absorption, but is she prepared to make the ultimate betrayal against them?

Dark Song wasn’t really what I expected and that’s both a good and bad thing. I kind of think the back of the book gives a lot of the story away but even with that it was still a pretty good read. Ames’ life has changed so dramatically that she hardly recognizes it anymore. Her father lost his job, the family is forced to move out of their home, and her mother is quickly becoming a live-in-home enemy of Ames’. While the two have bumped heads on numerous occasions, their relationship just deteriorates as everyone tries to come to terms with what Ames’ father has done.

When Marc comes into Ames’ life, he’s like a knight in shining armor. He understands what she’s going through and is fiercely protective of her. It’s hard for Ames not to fall in love with him. It’s Ames and Marc against the world and she would follow him anywhere, just as long as her younger sister, Chrissy, could be with them. But Marc has a darker side to him. A side that likes to collect guns and creep houses; a side that will stop at nothing to have Ames and keep him with her for always. When the time comes for her to choose between Marc and her parents, Ames is forced to consider the unthinkable and the unforgivable.

So much happens to Ames in such a short period of time. All her so-called friends turned on her when her father lost her job. Thankfully her best friend stays true though. But her father’s decisions seem to brand the entire family as outcasts in the rich suburban area that Ames lives in. Speaking of her father…what an asshole! Truly, I mean not only does he mess up and lose his job (and no it wasn’t downsizing) but he keeps messing up. He’s like a train wreck…only getting worse and causing more damage as the wreck continues to happen. And while I really empathize with Ames’ mother I felt she completely shut down and actually made things worse. I know she pretty much lost everything but she could have not taken it out on Ames so much. But I’m not excusing Ames at all because she was a spoiled brat a lot of the time.

So with Ames’ life falling apart I still found it hard to really connect with her and like her. But I didn’t really feel like I needed a connection with her or any of the characters to get what the story was about. Ames was completely lost after losing so much. I understand she had nowhere to really turn to and when Marc came into her life it was hard for her not to latch onto him. Even though I get all that I still wanted to slap the girl. Marc started showing signs of his crazy, creepy ways very early-on and it never bothered Ames. I know she was desperate, she’s young, and Marc seemed all great but I couldn’t help my violent feelings toward the girl. She definitely didn’t use her common sense.

Dark Song was a quick read which I liked. I like how it flowed and was divided into “before” and “after”. It was a scary read in the sense that it made me really think about what would happen if I were in Ames position. I might have reacted the same way (I’d like to think I wouldn’t have been so naïve) as Ames so I guess I shouldn’t be so hard on her. Dark Song was very realistic because things like this actually do happen in the real world. People are scary and crazy as hell in real life. I think Gail Giles did a really great job putting a crazy situation into words that is palpable to readers. This is my first time reading a book by Giles and I can see myself reading more of her work in the future.

Not a lot to do with the story in my opinion. But it’s still really neat and eye-catching. I just love the effect that was done with the flower. It’s very different! I like it.

*shakes head' Her dad does sound like a complete ass.

Nice review. Dunno if the book is for me though

He was, shockingly so in fact!

I always read the back of a book to get a general idea of what it's about, but I don't want too much information, either.

I've heard mixed things about this one, but I would love to make my own opinion.

I agree the cover doesn't really seem relevant. it sounds like a nice book though

The cover also caught my eye too, however I thought the flower represented turmoil sense it seems that the flower petals was dropping off, so i detected some sadness or hardship