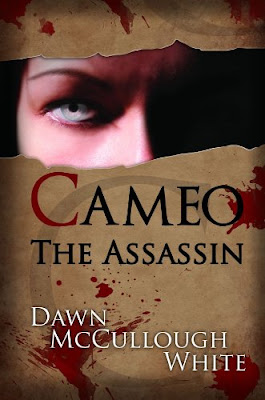 The Kingdom of Sieunes is rife with taverns, dirty streets, and clay pipe smoking citizens all toiling to feed their families and keep themselves in something little better than rags. With a foiled revolution just ten years prior still burning in the hearts of many, the royals enlist the aid of assassins to keep things in order. The townsfolk entertain themselves by dreaming of better times to come and regaling in stories of the undead said to walk the graveyards at night... and of Cameo the killer with corpse-like eyes...

Scarred and jaded Cameo is one of the most effective assassins in the employ of the Association, moving from one mission to the next as long as the alcohol keeps flowing. Her acceptance of the murder-for-hire lifestyle is thrown into doubt when she meets a local highwayman with a penchant for fine clothes and women, and then she begins to think about breaking with the company but no one ever breaks with the Association under good terms.

Cameo the Assassin is definitely a nice breath of fresh air in the dark fantasy/paranormal realm. Unique and entertaining, the first book looks to be a great opening into a very interesting series. I did have a few minor issues with the writing-style and technical execution. However, the characters are enjoyable, the storyline is fast-paced and engaging, and I’m looking forward to starting book two.

Cameo has a few dimensions to her character although she is very one-note throughout most of the book. I absolutely loved seeing her open up on those rare occasions with Opal and Kyrian. Not only is Cameo an assassin but she has supernatural abilities thanks to a near-death experience when she was younger. Being a vampire’s thrall and an assassin for the Association, Cameo doesn’t have much control over anything in her life. Killing is what she knows and what she does best and her personality mimics the distant and cold life of a killer. That is until she starts to care for the unruly company she has later on in the story. So even though she isn’t the most compelling character it’s really tough to rule her out as a great character.

Black Opal and Bellamy are two notorious highwaymen that Cameo comes across and actually starts to travel with despite her reluctance. The two of them really stand out when next to Cameo. Their personalities are loud and fun despite the fact that they are thieves and sometime killers. I think Opal is definitely my favorite character. He’s so full of himself and he’s incredibly weird but he’s so likeable.

My personal issue with the writing-style was nothing too major. I just found myself a bit confused during the novel. I felt there were occasions where the writing was incomplete or transitioned so abruptly that it didn’t quite fit. It wasn’t enough to deter from the actual story but it was enough to make me have to re-read certain parts. It felt as though there were passages missing and it left me a puzzled.

Overall I’m very impressed with the story Dawn has created. The pace is quick and enjoyable. There is tons of action that succeeds in not being over the top and over-detailed. And the teasing amount of romance is a great addition. I feel that Dawn’s got a lot up her sleeve concerning Cameo and I’m curious to see what she has in store for her readers.

I like the details with the blood and making sure the cover model’s eye color stays true to Cameo’s.

I love the cover for this! It certainly is a little creepy, but that definitely adds to the intrigue factor. Thanks for your review :)

Her characters are really what make the books. Opal and Bellamy are fantastic!! I love the dialogue and really have a sense that these could be real people - well minus the whole supernatural factor.

I love a good dark, twisty book and the cover really sets the mood.

I'm a follower on GFC-Lisa Richards