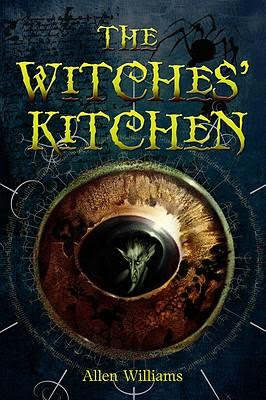 Deep in the walls of a witches' cottage lays an ancient magical kitchen. Dangling over that kitchen's cauldron, pinched between the fingers of two witches, is a toad. And the Toad has no idea how she got there, and no memory of even her name. All she knows is she doesn't think she was always a Toad, or that she's ever been here before. Determined to recover her memories she sets out on a journey to the oracle, and along the way picks up a rag-tag team of friends: an iron-handed imp, a carnivorous fairy, and a few friendly locals.

But the Kitchen won't make it easy. It is pitch black, infinite, and impossible to navigate, a living maze. Hiding in dark corners are beastly, starving things. Worse yet are the Witches themselves, who have sent a procession of horrific, deadly monsters on her trail. With some courage and wisdom, the Toad just might find herself yet-and with that knowledge, the power to defeat the mighty Witches.

Filled with forty stunning pencil illustrations from the author, the Witches' Kitchen is a rich, well-imagined fantasy setting unlike any other.

I didn’t really know what to expect when I opened The Witches’ Kitchen up. Honestly, I was worried it would be a little too “middle grade” for me (if that makes sense). At least that’s the impression I got from the blurb. But to my surprise I got sucked into the story from the beginning and found myself really enjoying the characters, the writing, and the awesome illustrations.

The Witches’ Kitchen is about a dark and magical kitchen that houses some really fantastical and frightening creatures. Among those creatures are two witch sisters that are up to no good. The book opens to the two of them dangling a poor toad over a bubbling cauldron. The toad isn’t too sure why she’s hanging upside down or why she’s even in the clutches of the witches. She’s not even sure what her name. After escaping from the witches, Toad sets out to recover her memories and somehow get away from the dangerous world that is the Kitchen. She ends up finding some unforgettable companions that help her with along the way.

Like I mentioned earlier, I had no idea that I was going to pretty much love this story. The writing style was simple yet really engaging. I was a little worried after the first few characters were introduced because they were crazy. Like out of this world crazy. Williams has a brilliant imagination and the illustrations were not only helpful, they were really well done! Of course, I had an ARC copy of the book so all the art I had wasn’t final. I can’t wait to get a finished copy and see the art in its entirety.

Toad’s character was timid at first. Of course, she has no idea who she is and why she’s in Kitchen in the first place. But she grows in development and becomes a strong-willed character soon enough. It’s hard to trust the supporting characters at first because nothing is what it seems in the Kitchen but those characters are just as important to the story as Toad is. The witches are nuts! They are power-driven, crazy, and just flat-out scary. Williams did an excellent job setting up the world of the Kitchen as well. It was never-ending, dark, creepy, and I know I would freak out if I found myself trapped there.

The Witches’ Kitchen is a book I never thought I’d end up liking. I’m so glad I won the ARC because I don’t I’d ever have read it on my own despite the interesting blurb. I recommend this to anyone who likes imaginative characters, great story-telling and beautiful artwork.

My ARC wasn’t too different from the finished product. The finished cover is definitely different and scary looking. I think it goes very well with the story!

This sounds great! Love that cover!

I found you site today on a hop from Housewife Blues ... and was surfing around. I have been curious about this book, but like you I have thought it might be a little to young for me, while I really enjoy reading YA, I no longer read much that is "too young." Thank you for sharing because I think I would really like this one!