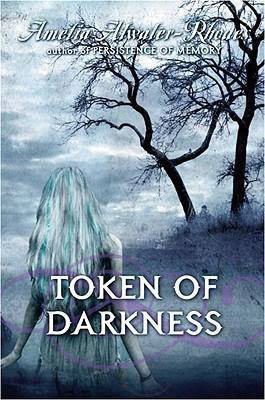 Cooper Blake has everything going for him until he wakes from a car accident with his football career in ruins and a mysterious, attractive girl by his side. Cooper doesn't know how Samantha got there or why he can see her; all he knows is that she’s a ghost, and the shadows that surround her seem intent on destroying her.

No one from Cooper's old life would understand what he can barely grasp himself...but Delilah, the captain of the cheerleading squad, has secrets of her own, like her ability to see beyond the physical world, and her tangled history with Brent, a loner from a neighboring school who can hear strangers' most intimate thoughts. Delilah and Brent know that Cooper is in more trouble than he realizes, and that Samantha may not be as innocent as she has led Cooper to believe. But the only way to figure out where Samantha came from will put them all in more danger than they ever dreamed possible.

I remember first coming across Amelia’s books in my high school library. I wasn’t as big a reader back then as I am now, but I remember reading every one of her books I could find. I really enjoyed her Den of Shadows series and I even think I read a few of the books from the Kiesha’ra series as well. I don’t recall much from the books but Amelia’s name stayed with me as I started to become a more avid reader. So I was pretty confident I would enjoy Token of Darkness despite its so-so reviews.


It’s been several months since Cooper has woken up from a horrible car accident. His life has never been the same since that fateful summer night. Cooper has drifted far from his old football life, his old friends, and even his family. The only constant thing in his life at the moment is Samantha who happens to be a ghost. As soon as he woke up from the accident, Samantha was by his side. Neither of them knows why she’s there or where she came from. But she’s been a constant companion to Cooper as he recuperated from the accident and tried to put his life back together.

Cooper has isolated himself from everyone in his life. He basically gets up, works at his father’s coffee shop, goes to school, and then returns home. His family and friends try to give him as much time and room as possible but no one knows when Cooper will be okay again. Cooper is still struggling with nightmares of the accident and the injuries he sustained. Samantha and the mystery of her being tend to keep his mind off things. The two have been searching for a reason for her existence but have come up with nothing.

But everything changes when the head cheerleader and a loner from a nearby school take an interest in Cooper. Delilah and Brent have secret secrets of their own and share a complicated past. Each has different agendas as they set out to help Cooper figure out who Samantha is and where she came from. But none of them know how much danger lays ahead of them in their quest for answers.

The novel flowed very nicely and moved at a reasonable pace. But I found myself a little confused at times, whether that had to do with the plot or the writing style I’m not too sure. I liked the characters just fine but didn’t really feel any of them had a significant personality that stood out. I also had a tough time getting through the part about Samantha and who she really was. I felt more details were needed in the paranormal aspect of the story.

Overall, this was a quick and enjoyable read. I liked the premise of the story even though I was somewhat confused at times. But I still think everything could have used more details and development. I’m planning on re-reading Amelia’s books so I can reacquaint myself with her older work. Like I said earlier, I remember enjoying them but can’t remember a thing about them. Go figure!

I like the fact that Samantha is on the cover but I don’t like the overall effect. Maybe it’s too much blue and purple for me, I’m not too sure. I’m just not a big fan of this version of the cover.

Hm, the cover...I think it's those purple lines, could have taken those out

I've never heard of this author before but the book sounds interesting. I really hate the cover though, it looks like something a self-published book would have almost.

There is another hardcover version out that is a little better.