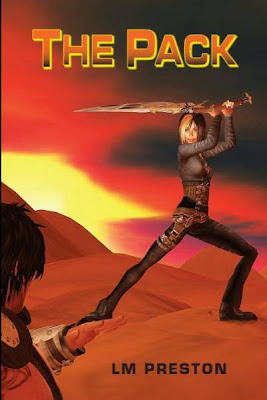 Series or Stand Alone: The Pack series, book one

Shamira is considered an outcast by most, but little do they know that Shamira is on a mission. Kids on Mars are disappearing, but Shamira decides to use the criminals most unlikely weapons against them, the very kids of which they have captured. In order to succeed, she is forced to trust another, something she is afraid to do. However, Valens her connection to the underworld of her enemy, proves to be a useful ally. Time is slipping, and so is her control on the power that resides within her. Yet, in order to save her brother's life she is willing to risk it all.

L.M. Preston has created an entertaining and action-packed world filled with sci-fi fantasy for the young adult reader. Set on a colonized Mars, children are disappearing and the ones being targeted are not at random. Children of the Security Force Elite are being taken and Shamira feels she’s the only one that can save the missing children. When her beloved younger brother becomes a victim of the kidnappings Shamira sets out to find whoever is responsible and make them pay.

Shamira is blind when she is first introduced in the story. However, she is still a forced to be reckoned with despite her disability. Her being blind isn’t the only thing that sets Shamira apart from the other children on Mars. After a horrible accident when she was a baby Shamira became blind and developed a “power” within her that makes gives her super-human strength and agility. Although Shamira has felt like an outcast her entire life, she has such a fierce and loyal personality. She also hates pity and feels the need to hide her enhanced abilities from the rest of the world, including her parents. Shamira has her downfalls; she’s a proud and independent heroine. But she can be vulnerable and L.M. Preston does a really great job with Shamira’s development and personality.

Having not read L.M. Preston’s writing before, THE PACK was a fast paced read that I really enjoyed. It sends out great messages of family and friendship and even has a touch of romance sprinkled into the story. It was pretty cool that Shamira and the other children she joins forces with are in charge of the story. I think a lot of younger readers will absolutely love that aspect of the story. These children are out to save Mars and bring down Monev. I’m looking forward to continuing on with Shamira and the children of Mars with the second book in series set to be released in 2012.

She sounds like Daredevil! Okay so how much of a geek does it make me that everything I see I have a comic book reference for? I find that ‘proud and independent’ can lead to annoying but it seems Preston has managed to avoid that. Sounds great.

It sounds interesting. I like the fact that she is blind but still an heroine!
Thanks for the review. I haven't read anything from this author yet, but always heard great things about her books.

I love the premise of The Pack! And of course that the heroine is the main character, and that the author's daughter influenced this. I love young adult reading when it is sci-fi, because sometimes I just need a break and to regain my youth! (which is done through some of these books. Also, if I like it I will pass them on to my teens, or at least recommend it to them!)