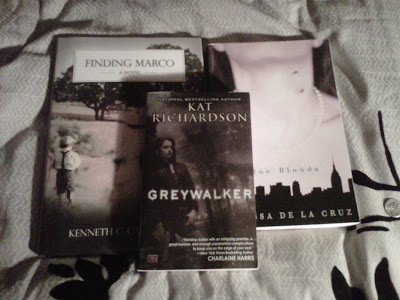 Finding Marco :: Kenneth C. Cancellara
(Received for review)
As a young boy, running through the mountain valleys of Italy, Mark Gentile dreams of success-the kind of success that happens in a boardroom, far away from the country life. So after graduating from law school, Mark quickly climbs the corporate and legal ladder, eventually becoming CEO of a leading auto manufacturer. But after butting heads with company leaders, Mark fears he has compromised his ethics. With his wife's blessing, Mark returns to Acerenza, his birthplace in southern Italy. While enjoying the leisurely pace of the new life he's found in his old home, however, Mark must make a decision: Should he abandon his roots for a second time and satisfy his innate hunger for the struggles and rewards of corporate life? Or should he embrace his native land and create a more balanced life for himself and his family?

Greywalker :: Kat Richardson
(Book one in the Greywalker series)
(Won in giveaway - Thank you Brooke!)


Harper Blaine was slogging along as a small-time P.I. when a two-bit perp's savage assault left her dead. For two minutes, to be precise.


When Harper comes to in the hospital, she begins to feel a bit ...strange. She sees things that can only be described as weird-shapes emerging from a foggy grey mist, snarling teeth, creatures roaring.

But Harper's not crazy. Her "death" has made her a Greywalker-able to move between our world and the mysterious, cross-over zone where things that go bump in the night exist. And her new gift (or curse) is about to drag her into that world of vampires and ghosts, magic and witches, necromancers and sinister artifacts. Whether she likes it or not.

Blue Bloods :: Melissa De La Cruz
(Book one in the Blue Bloods series)
When the Mayflower set sail in 1620, it carried on board the men and women who would shape America: Miles Standish; John Alden; Constance Hopkins. But some among the Pilgrims were not pure of heart; they were not escaping religious persecution. Indeed, they were not even human. They were vampires.The vampires assimilated quickly into the New World. Rising to levels of enormous power, wealth, and influence, they were the celebrated blue bloods of American society.
The Blue Bloods vowed that their immortal status would remain a closely guarded secret. And they kept that secret for centuries. But now, in New York City, the secret is seeping out. Schuyler Van Alen is a sophomore at a prestigious private school. Suddenly, when she turns fifteen, there is a visible mosaic of blue veins on her arm. She starts to crave raw food and she is having flashbacks to ancient times. Then a girl from her school is found dead... drained of all her blood. Schuyler doesn't know what to think.
Could those vampire legends really be true? Steeped in vampire lore and set against the heady backdrop of the rich, young, and powerful in the heart of New York City, Blue Bloods will be devoured by Melissa de la Cruz's legion fans.