ARC Review: The Reapers Are the Angels 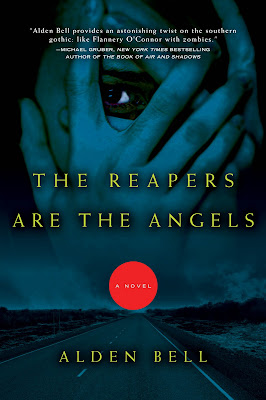 The Reapers Are the Angels
Alden Bell

Zombies have infested a fallen America. A young girl named Temple is on the run. Haunted by her past and pursued by a killer, Temple is surrounded by death and danger, hoping to be set free.

For twenty-five years, civilization has survived in meager enclaves, guarded against a plague of the dead. Temple wanders this blighted landscape, keeping to herself and keeping her demons inside her heart. She can't remember a time before the zombies, but she does remember an old man who took her in and the younger brother she cared for until the tragedy that set her on a personal journey toward redemption. Moving back and forth between the insulated remnants of society and the brutal frontier beyond, Temple must decide where ultimately to make a home and find the salvation she seeks.


THE REAPERS ARE THE ANGELS was a surprising read for me. I honestly took the book on for review because I haven’t read too many zombie books. The blurb sounded pretty decent too so I was like “Sure, why not?” But I wasn’t expecting a book that was going to stick with me long after I closed the cover. Maybe it was the quotation-less dialogue (which is a new experience), or the obvious Southern Gothic backbone of the novel, or maybe just the fact that Alden Bell made me think outside of the box. Whatever it was, I walked away knowing I had probably just read a future classic of the post-apocalyptic genre.

(And to go off on a tangent for a moment… Alden Bell is actually a pseudonym for Joshua Gaylord. Significance of that? I won a book called HUMMINGBIRDS sometime ago and it’s been sitting on my shelves for a while now. Who wrote that book? A Mr. Joshua Gaylord… Definitely bumped that book to the top of the stack of TBR books!)

Temple estimates her age to be around 15 (or 16 depending on her mood). All she’s known in life is the “meatskin” infested world that she was born into. And yet despite her dark, gritty, and hopeless surroundings Temple is still able to find beauty in all the chaos. However, Temple is no sweet-hearted heroine. Temple can be described as hardcore, and I don't mean kick-ass take-no-prisoners kind of sense exactly. She is a true survivor and resembles nothing of the sweet teenager she could have been if she was alive before the fall of humanity. A lone traveler, Temple has been forced to grow up into an adult that has a brutal honesty about her that was hard to connect with on a personal level. But that didn't stop me from caring about her as a character.

One cannot take pity on Temple. In fact, I'm sure she'd hate pity in any form. Always on the move, Temple has found the tools to keep herself alive and has done whatever necessary to make sure she sees another day. But I wouldn't be quick to call her ruthless although a lot of evidence points to that description. There is a vulnerability about Temple that called to me. As Temple's odd journey through a dangerous and rugged America plays out, it becomes quickly apparent that zombies are not the most strange, grotesque, or scary thing to be encountered.

THE REAPERS ARE THE ANGELS is much more than zombie fiction. In fact, zombies seem to be the backdrop in a story filled with humanity's ability to survive in a post-apocalyptic world. Each of the secondary characters Temple encounters shows different aspects of survival. Some can find there way in a lost existence while others simply cannot handle the stress of it all. But I think the best thing about the novel is the torn relationship between her and her pursuer. Moses Todd is after Temple with a vengeance. Accidentally wronged or not, Moses is on a mission to end Temple's existence. But the similarity between their personalities is both striking and engaging. Moses is obviously the "bad guy" and yet the rules and morals he lives by mimic Temple's. The dynamic relationship between the two characters is something that drives the novel into a different territory for me as a reader. And with an ending that left me both shocked and satisfied I must recommend you read it on their relationship alone.

Without giving too much of the plot away (because let's face it, you can easily research the many reviews already out and see what the book is about) I ask you to take a chance on this novel. It's got a soulfulness I have yet to encounter in a book. I remember reading the novel and saying to myself that "there's just so much behind these words". I knew I'd have a tough time writing the review. I knew there was no way to accurately get my feelings across. Hopefully my lack of a deserving review for THE REAPERS ARE THE ANGELS will at least get you curious about it. Read it. Tell me how it makes you feel. I bet it will both shock and surprise you.

Wow, this book sounds great! And it has quotation-less dialogue, you say? I've only seen that done before in Jane Mendelsohn's books. (Love her writing.) Gives me yet another reason to add this book to my To Read list--I want to see how another author handles that technique!

Great review - I adored this book - kept me up way too late!!!